Design a site like this with WordPress.com
Get started
Skip to content
ria630209holmesgmailcom Uncategorized May 24, 2019May 25, 2019 4 Minutes

We started the day off walking some pastures, which I always enjoy. 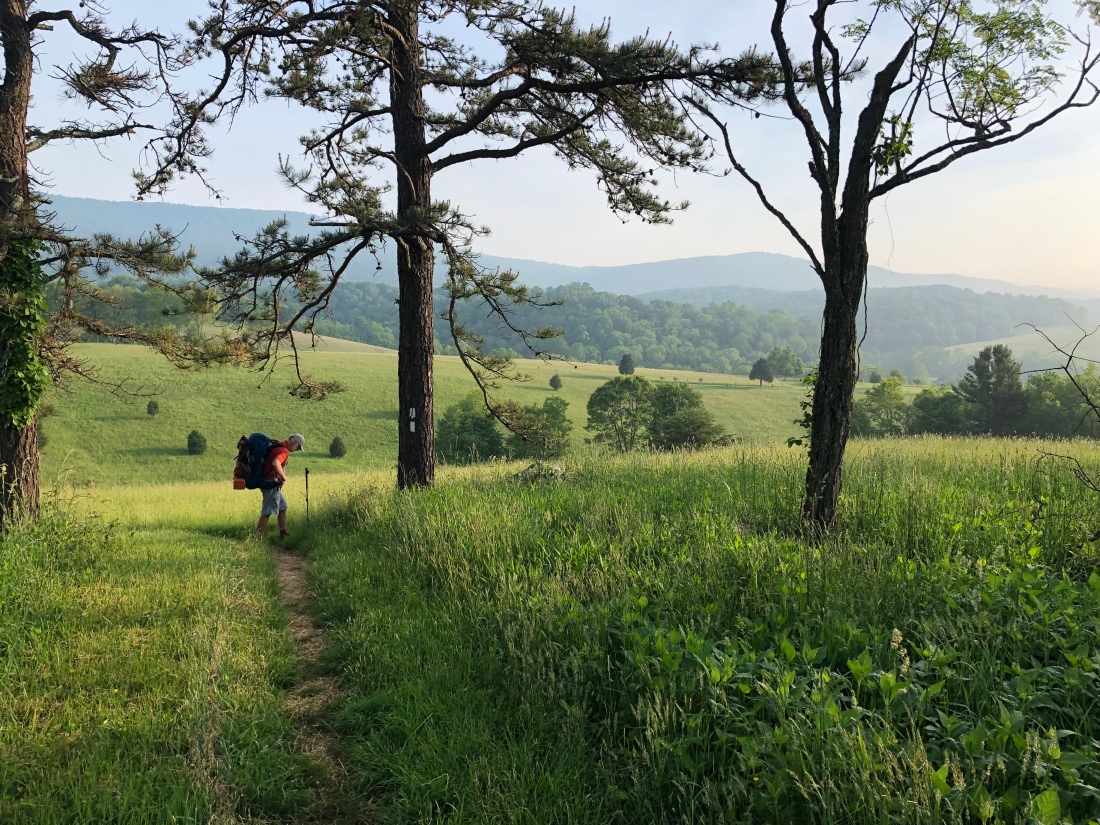 We walked past a 300 year oak tree, the oldest living dated tree on the AT.

We knew it was going to be a scorcher with water sources few and far between so we had to make sure we fill up where ever there was an opportunity. We were walking along calculating how much water we could have per hour to get us to the next water source when we got to a small road crossing where 3 guys were busy getting 2 backpacks ready.

The oldest of the three asked if we needed anything – he was dropping his 2 friends off and they had more than they needed. I asked if they had extra water and he pulled out a 10 litre container and filled up our empty bottles. He then gave us some dwarf naartjies (mandarins – half the size of a respectable naartjie) and a cold drink each (I had a Gaterade which is like our Powerade and as insipid, but great for rehydration). So it wasn’t traditional trail magic but it certainly was trail magic.

These three guys met on the trail a few years ago, realised they liked each other and became friends. One of them (Ice Man) had thru-hiked the AT several times, and now he is section hiking with the other one (Lucky) while the older guy (Gurr) is supporting them, taking food and cold drinks to where the AT crosses the road.

Ice Man gave Trevor his number and told us to contact him when we get to the Pensylvania (no Internet so can’t check the spelling – give me a break!), where he lives. Not sure if he will bring us cold drink, meet as for lunch at a zero day, or hike with us for a few days, but we will certainly contact him, what a nice sincere man.

Now to get to the rude redhead I need to go back to yesterday. He arrived at a shelter as we were leaving after our lunch. He came in as if blown in by a Tornado. Hiking poles wildly swinging, red-brown curls drenched in sweat, and breathing as if he has just finished a marathon . He pulled out his pot in the same movement he put down his pack and told us he needs to eat to get ready for the next 10 miles.

We left and crawled up one of those never ending hills, we were just taking a break halfway up the hill when he came steaming past – telling us that pain is only weakness leaving the body. He looked a bit embarrassed when we arrived at our planned camping spot and he was there too: all his pumping didn’t get him to mile whatever he planned to get to, the hill tripped him up too.

So while we were chatting to the three accidental trail angels, he arrived again in how I now expect to see him, huffing and puffing and hiking poles flying around as if they have a life of their own. As he asked us if we need anything, the old man asked him too. He had the bag of mandarins in his hands, the guy said if it’s on offer he will have one of those, took the piece of fruit without breaking his stride and said “it’s all I need to get me through the next 25 miles” and off he went.

I like most people I meet on the trail but not this one. Prancing around announcing his intended mileage to everyone (and nobody cares: hike your own hike), not having the decency to spend 3 minutes to chat to someone who offered him kindness. I hope he did his 25 miles from that point so that he is far enough ahead of us to not cross our path again!

We had a long day and it was hot. By 16h00 we still had 6km to go but the heat got to me. Trevor found a great shady spot and we rested for an hour. During that time we cooked and had our dinner. When we set off again I felt better, my body temperature had cooled down, my tummy was full and it was cooling down a bit. We did the 3km climb nursing ourselves along with Skittles (little chewy sweets in different colours which we play Lance Armstrong Cheat game with; every colour is associated with an offense and gets points depending on how bad the cheat is, as you eat you add up the points and at the top of the hill the winner is the one with the highest score – very grown up hey 😀). When we got to the top it was nice and cool and we walked across a ridge for another 3km; it was really pleasant. We even left out packs and walked up a few extra meters to go and look at the Audi Leon Murphy memorial – America’s most decorated world war 2 vet who died when he flew into the mountain we are sleeping on tonight.

Tomorrow there is a general store and deli on route again. It will mean 1.5km extra walking to get to it and back again, but I suspect that will be done in pursuit of a hamburger and cold drink and some people watching……a good use of our time – apparently 😀